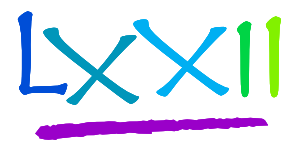 Via Hendrix was 21, fresh out of college, and had found a starter job. Unlike her friends who had scattered to the outer boroughs of Queens and Brooklyn, she wanted to live in the absolute center of New York City. There are several neighborhoods that one person or another would consider the true dead center of New York City but Greenwich Village or more commonly the West Village or just the Village is one of the most highly desired locations, particularly for young people, artists, writers, and creative others.  It is also one of the most expensive.

What is affordable city living?

Expensive, but unlike the suburbs, the Village is full of funky old buildings have been cut up into tiny apartments. Decades ago it was possible to negotiate an unbreakable lease on a reasonably large space if it was mostly unlivable and required DIY renovations to secure heat and hot water. As the city and the neighborhood flourished and the rents skyrocketed, the leaseholder might convert a corner room into an independent apartment just to pay their own rent. And a few years later another part would be sectioned off. In time, it took maybe six apartments to pay the rent for the same amount of space in the same location.

Some of these apartments are very, very tiny. A friend who is a flight attendant has one on the top floor of a walk-up. It is at the top of the back stairs—literally. On the landing.

The door to his apartment had been installed on the next-to-the-last-top stair. Open the door and take one step up to what is now a foyer of four square feet on the edge of the original landing. You can step straight ahead into a small closet that holds the toilet. You can pivot to the right to take one step into a room built on the side of the landing barely large enough to hold a three-quarter-sized futon. Or pivot to the left to enter the kitchen with a mini-fridge, a very old stove with an oven, and one cabinet. The kitchen also has a bathtub and two chairs. No room for a table. Originally, it had been a small window seat area that looked out over 6th Avenue.

Liz, however, was newly arrived and extremely lucky to find her 72 SF apartment for which she paid $1,345 a month. In an article in Medium’s Insider she talks about how she prepares for her day as she adjusts the space to her needs. 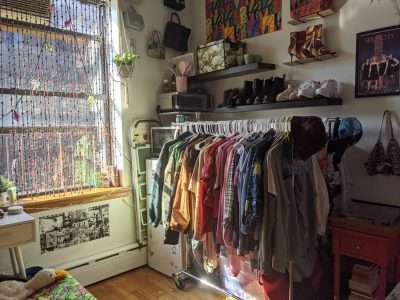 Storage in Via Hendrix’s 72 sf apartment.

Her story is typical of how people live in the Village and in cities everywhere. Of course, some very wealthy actors or investment fund bankers live lavishly, but there aren’t so many of them as you would think from watching the movies. (All of them are probably in the movies.) Cities are an odd mix of people at all income levels and all living on the edge.

Similar to articles about living in tiny houses she explains how she has created storage space by displaying purses and shoes on the wall. How she times her shower so the bathroom floor is dry when she needs to put on her makeup. The best description of her bathroom is that the toilet and sink are in the shower. She has carefully orchestrated all the steps for making an English breakfast putting one device away before getting out another. What I particularly like about the article is that her enjoyment of living in the center of all the things cities have to offer comes through as she describes how she cooks a Trader Joe’s meal or entertains guests with a pasta meal. (Yes, guests!).

The balance of public and private space

The tension in affordable city living is that land is very expensive (and even non existent) in the city but where land is affordable, in rural areas, there are no jobs. Even from the suburbs the commutes are long. But when you live in the city, you live in the city. You go out to find inexpensive eateries and street food. Or splurge at the best restaurants in the world. Walk to parks and up and down promenades. To lectures and films. To watch dancers perform on the corner. Bookstores, libraries, and museums are right there. When you come home, you are ready to nest. To collapse and be private curled up in a corner with a book or a movie or a podcast. Or silence. In a cozy space.

Understanding that balance, how to adjust expectations is what makes the space support the lifestyle. Another 400 SF in the middle of the floor would just be wasted. And cost another $1300.

And the view from the fire escape is spectacular. And costs nothing. 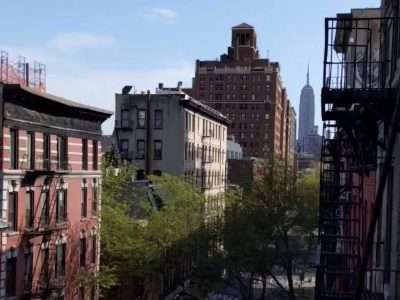