Am I an Anarchist? 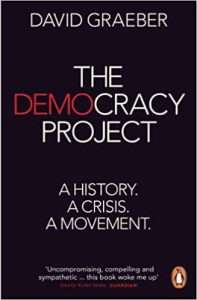 As usual, I had been awake at 3 am reading instead of sleeping. Following the Dawn of Everything, it was David Graeber’s history of the Occupy Wall Street movement, The Democracy Project. A good part of the book explains the process of reaching a consensus and why the process is important in organizing groups, in this case of activists protesting income inequality. The demonstration was organized by many people working collectively and not by a non-profit or political organization. And to the surprise of everyone inside and outside the demonstration, it was an incredible success. How? And why?

As one of the organizers — by design, there were no leaders— Graeber was as surprised as everyone else. Why did a mass demonstration involving camping out for weeks as close to Wall Street as possible suddenly come together and last for days in a city park in the rain and constant police harassment? Surprisingly, it came down to one of the basic principles of anarchy—stop telling me how to live my life.

Am I an Anarchist?

That’s where its relevance to me came in, insisting on controlling my own life. I have read about painters who it turns out were anarchists—Courbet, Pissarro, Seurat, but in art history classes their politics is not particularly well explained. And all artists like to affiliate themselves with the “other side” whatever it happens to be. The writers were closely aligned: Joseph Heller, Ursula Le Guin, and Edward Abbey. Picasso considered himself everything at one time or another. And the singular Emma Goldman and her journal, Mother Earth, had been everywhere in the Feminist Movement although she found feminism to be another red herring. Paying little attention to their anarchism, I had brushed by these carefully. Very carefully.

I’m generally considered a difficult person in most contexts. Some say belligerent, which I don’t accept, and others say opinionated which I also don’t accept. I do have lots of opinions, which I change and espouse again. These are, I protest, informed opinions and I’m happy to hear counter-opinions. But the larger thorn for most people is probably that I’m not shy about expressing my opinions and even less shy about expressing my objections. I speak up. With some wind at my back. And that’s the problem. If anarchists have a reputation for anything it is objecting, physically as well as verbally. I was afraid that if I studied the anarchist philosophy of life, it would only encourage me to make my edges sharper and my objections louder. I could end up being less welcome in groups than I was already. (I’m not the kind of person who wins elections, for example.)

But David Graeber has an incredible ability to sort things out so they seem to be whole new ideas. Under all the hoopla of all the outrageous lifestyles and violent revolutions, he breaks everything down to its simplest terms. He sometimes takes 600 pages to do it but he gets there. Generally, anarchists are described as being against rules of any kind and dangerous when protesting or being arrested. Anarchists are violent people who want to overthrow the government, any form of government. But this is not true.

Anarchists just want the government to stay out of their lives. They want to live peacefully without arbitrary restrictions and unfair requirements. To void laws passed without their agreement and without any conceivable benefit except to allow the powerful to control the lives of the rest of us.

A Family of Anarchists?

While it was a shock to see myself as an anarchist and intriguing to find a new direction of study that might help resolve questions about how to address inequality and encourage people to take charge of their own communities, it was also an obvious key to understanding my family. And I needed that information decades ago. Since many have now died, it will be a hindsight-is-20/20 study.

My father’s side of the family has a strain of DNA that some people inherit and it shapes their personality. On the family tree, their box would be colored deep tangerine. Or dark carrot. Some would be less deep and dark than others but definitely some shade closer to red flames than to a nice cool day. When reading about anarchists from David Graeber’s point of view it was suddenly clear to me that all of us, the strong orange ones with freckles were in the constant condition of reacting to any suggestion that we should do this or that. Just the suggestion, mind you. Given that we are all generously endowed with opinions and the energy to express them, sometimes they are more than suggestions. But even with a suggestion the party goes haywire—or gets off course before it even begins. After the phone calls making arrangements for a family gathering, one or another of us will choose to go to a foreign country instead. And stay there for some unpredictable period of time.

If I had been more aware, I could have tempered my opinions and theirs with a reminder that we are all speaking for ourselves. And that further, that’s all we need to do. Get things straight about who we are and what we need, and leave others alone. When we understand how to do that, it becomes possible to work things out. To find a solution that everyone can live with, together. Or at least on our own side of the dotted line marking personal space.