On Writing, Design, Life, and Other Odds & Ends

Comprehending Time, Passing Through a Wall

Explaining to a seven-year-old how to tell when 5 hours had passed, I pointed to the clock. No, she said. I know how to tell time, but I don’t comprehend it. How long is it? What can I do in five hours?

I was almost 70 then and I couldn’t comprehend time either. Hours, yes. But I was in the decades. How long my life had been—how long anything had been. What had I done with all the time? Was it really that much time? More than a year later, I still felt like I must be lying when I said I was 70, but that was the only answer I had. I was stuck with it.

At 75, I began to believe that I was over 70 — probably over 70, still with a doubt. I became convinced firstly, by practicing saying it and thinking about it, and secondly, when notified that I had to have a doctor’s note to renew my driver’s license. That made it tangible. I now had to stand in the other line, live by different rules. See the footnote. Or even look for a different website.

But still, it was just something that required more paperwork, and deciding whether it was good or bad to allow people to race over to pick up things for me. And wondering if I was dropping things more or just noticing how far it was to the floor.

I was 76  before I comprehended time as age. I had baked the Thanksgiving turkey for 25 and made soup the next day. Had I really done this 40 or more times? Had my birthday happened in the middle as usual, largely unnoticed for the 76th time?

As grey December began, as usual, I became reclusive, thinking about changing my life—or whether life was changing me? It was now possible to calculate how many years I had left, how many good years. What did I want to accomplish? What should I stop doing so I could focus and have a chance of finishing something? I had been secluded for a week not talking to anyone and canceling out on four social events at the last minute, three on consecutive days. People were beginning to ask.

I still didn’t want to go out to dinner or gift exchanges or watch meaningful theater. I was even out of sorts with MSNBC, my background of white noise. The week ended and calling for takeout was still too much interaction. What would become of me? Should I just give up and be old? Just stay by myself and do all my predictable and loved things—writing, knitting, reading, making paper flowers, avoiding daily cooking, and avoiding exercise (at all costs). I had some months past lost the automatic habit of getting dressed in the morning. It was a decision I now made later in the day depending on whether I planned to go out or not. Increasingly, I didn’t.

Passing Through a Wall

Lost in all of this, a grey wall flooded into my view. Not a stone wall or a brick wall but a wall of translucent photographs—mostly people, anonymous but not ominous. One face blurring into another in the layers of grey mist. The wall was moving like images in videos that slide off to the left or right to reappear from the top or bottom. Its length dissolved into a distant vanishing point. The wall was deep, layers of faces and spaces. It was as if Rod Stewart might stand up and say This is the Twilight Zone. And then he did. But he didn’t say anything.

In seconds, the pervious wall engulfed me and disappeared behind me. I was on the other side. Rod Stewart was gone.

Rather suddenly I felt less unbalanced and less unsure. More accepting but still tentative. I was left sitting comfortably aside from the Sturm und Drang. I was on the other side. There was time to be more concerned about the downfall of democracy. It wasn’t arrogance or grandiosity that was pushing me to be concerned about understanding the meaning of the principles of freedom and equality. What is safe? What is fair? Was there anything that would promise movement in a hope-worthy direction?

I became less repentant about leaving dirty dishes on the kitchen counter. It was my counter.

The bell had rung. I could never go back. But it didn’t feel like a problem, more like a release. But life felt different. As if I had graduated from something, or to something. 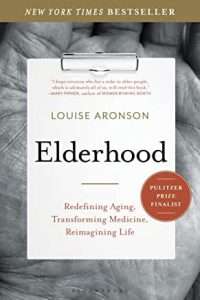 Of course, I went looking for a book that would explain where I was now that I had landed on the other side of the curtain.

I found Elderhood by Louise Aronson. It’s written about her experiences working in the medical field with elderly patients but she rises above the identification of elderly with dying. Her perspective is that the elderly are in a stage of life that often comes with infirmities that need to be accommodated, but they do not define who the person is or how they experience life.

Links to recommended resources (and some not) mostly for my own reference because I forget them.