Depressed for No Good Reason: Hiding in Plain Sight

Well, not exactly depressed for no good reason. It’s the fifty-first day of my shelter-in-place sojourn for covid and I finished reading Sarah Kendzior’s Hiding in Plain Sight: The Invention of Donald Trump and the Erosion of America this morning. As a specialist, Kendzior explains the development of autocracies and kleptocracies and chronicles all the steps in Donald Trump’s rise to power. Good book but not an upper. 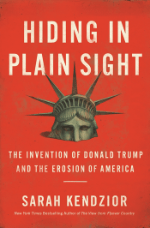 Hiding in Plain Sight is written the way Western journalists write about dictatorships on the other side of the world. Trump is actually incapable of running an autocracy without a lot of help—which unfortunately he has—because it requires more attention than he is willing to give it. But he is a master at kleptocracy, turning everything into his personal gain. He doesn’t look for the silver lining; he wants the whole gold box, full of postmarked honorifics. And is not shy about saying so—to any fellow autocrat in the world who can help him get it. The only good thing about this is that Trump isn’t a good judge of “a fellow” or “not a fellow.”

The tone of Hiding in Plain Sight is immediately apparent. It starts with:

The Trump administration is like a reality show featuring villains from every major political scandal of the past forty years—Watergate, Iran-Contra, 9/11, the Iraq War, the 2008 financial collapse—in recurring roles and revivals, despite the widespread desire of the public for the show to be canceled. From Roger Stone to Paul Manafort to William Barr, it is a Celebrity Apprentice of federal felons and disgraced operatives dragged out of the shadows and thrust back into the spotlight—with Donald Trump, yet again, at the helm.

And that is just the beginning. She goes on to say,

The crises of political corruption, organized crime, and endemic racism are all connected, and they shape everyday American life. But in addition to these structural problems, we contend with specific powerful individuals who have acted against the public good for their entire careers. We see the same old men, again and again, vampires feeding on a nation and draining the lifeblood from words like “treason” and “trauma” and “tragedy.” They are buffered by backers who prefer to operate in silence, free from the consequences of scrutiny. There is a reason they call it a criminal underground: you walk over it every day, unaware it exists until the earth shakes below your feet.

The use of words like “treason,” “trauma,” “tragedy,” and “apocalyptic,” are not often used by professionally respected American journalists to describe political events in the United States of America. Kendzior’s language is straight on and it was jarring until I had followed her argument for a third of the book. The facts are easily confirmable. I recognized the details of Trump’s life in New York City and the actions taken during his presidency. There is no disputing the facts. But just like the Republicans in his impeachment trial, we have ignored their impact and treated them as belonging to a different world. Trump and friends are “over there somewhere.” As if they were indeed on reality TV — both really happening and not meaning anything because it’s television.

It’s All in Public Records

Kendzior’s sources are public records: speeches, newspapers and journals, think-tank papers, and television broadcasts. She is frequently an invited speaker at national conferences and has done hundreds of interviews with statesmen and journalists throughout the Middle East, Eastern Europe, and the former Soviet Bloc. From all sides, the facts are confirmed and still hidden in plain sight. Trump will tell anyone who asks exactly what he did and will do, and he dares anyone to stop him. His weapons are denial and falsehood. There are no secrets.

A funnier story about this occurred during an interview with Rachel Maddow by Stephen Colbert. The most recent story was about Trump trying to blackmail the President of Ukraine.  Colbert asked, Well since your signature style is to tell the story behind the news, how does it feel to be upstaged by Trump who told the story himself? Maddow laughed and responded, And when you ask him if he did it, he says yes. Nothing to even investigate!

The unique importance of Kendzior’s work is that she lays out all the facts, connects the dots,  and exposes the advantages of Trump’s actions for himself and his family. And going further, she explains their dangers to democracy. Even more disturbing, she details situations where journalists and government agencies could have taken action and explicitly refused to. Agency heads buried evidence and fired people whose investigations resulted in illegal and even treasonous activities. Russian assets* infiltrated agencies with no greater prosecution than being fired.  The FBI made announcements that aided in Trump’s reelection while withholding information about their investigations into him.

The saddest for me was the New York Times. I tend to trust the Times implicitly. If they print it, they have confirmed it. If they don’t print it, it isn’t real. I was shaken by the Judith Miller and Iraq War fiasco confirming the Bush administration’s assertion that the premise for the war had been confirmed. Iraq had the parts to construct nuclear weapons. Ultimately, they fired her and admitted the fault but it was months before they questioned her sources.  I eventually recovered but now Kendzior indicts the Times again.

Kendzior reveals many situations in which the Times, along with government agencies, watchdog organizations, regulatory agencies, public officials, news programs, and others who had the proof and explicitly refused to publish it. Kendzior names the names and gives the dates, and lists her sources. She isn’t optimistic about the future and isn’t sure that Trump won’t be elected again, but understanding the condition of our democracy and our nation is vital if we want to dig ourselves out—if it is still possible.

*The word assets is used instead of operatives or spies because the individuals are not in the employment of a foreign government. They are people who could be blackmailed or gain other benefits from the foreign country receiving internal information.

Hiding in Plain Sight: The Invention of Donald Trump and the Erosion of America by Sarah Kendzior. (Flatiron Books, April 2020)

Sarah Kendzior is best known for her reporting on St. Louis, her coverage of the 2016 election, and her academic research on authoritarian states. She is currently an op-ed columnist for the Globe and Mail and she was named by Foreign Policy as one of the “100 people you should be following on Twitter to make sense of global events.” Her reporting has been featured in many publications, including Politico, Slate, The Atlantic, Fast Company, The Chicago Tribune, TeenVogue, and The New York Times.
“[Kendzior’s] book documents Trump’s ‘decades-long erosion of American stability, integrity, and democracy.’ I recommend it, especially if you have any doubt about what’s at stake in this year’s presidential election.”
―Connie Schultz, Pulitzer Prize-winning columnist