Modern Daily Knitting has a weekend post by DG Strong called “Knit to This” in which he offers wonderful recommendations of music, films, etc., to keep you knitting all day. This week it was the newest series, “Julia” on HBO Max along with a YouTube video of a program with Julia Child and a very young Martha Stewart, Martha Stewart Bakes with Julia Child. Of course, Martha tries to one-up dear Julia but is typically rather obvious so it doesn’t come off.

I had seen the HBO Max series, which was wonderful, so I followed the link to the Martha Stewart video. Also wonderful, but most importantly it led to a treasure: recordings from a conference sponsored by Radcliffe to celebrate Julia Child’s 100th birthday. Julia not only lived in Cambridge but Radcliff has all of her papers so it is a center for Julia Studies. Siting Julia: A Julia Child Centenary Exhibit & Symposium

There are four videos of the sessions that include autobiographical and critical analysis as well as lots of stories and personal reminiscences. An incredible treasure trove. Papers and informal presentations by scholars and people who knew her. Scholars who looked at her work in a historical context: Paris after WWII, cooking shows before and after, the Cambridge food scene. Russell Morash, the television producer and director of her first cooking show on WGBH tells the true stories behind various stunts, near calamities, and escapades out to film in remote locations. Many stories about her boundless energy, which drove everyone on.

Includes a good session on the development of the foodie scene in Cambridge—chefs, restaurants, butchers, dining rooms, etc. Another is a reminder that the Paris that Julia began her studies in was not the Paris of today. It was the aftermath of the catastrophic bombings. All the buildings were black from smoke and soot. The streets were littered with debris. The economy was in desperate straits. That Julia was such a sensation in the United States was remarkable but equally remarkable is that in Paris she was unknown. Of course, they didn’t need to hear about a cookbook on French cooking, but they were also very busy just putting their lives back together. That’s why Julia was there in the first place. Eventually, she was honored with the French Legion of Honour but only after she was an internationally known author, chef, and television star.

During the war, Julia had been an intelligence officer in the Office of Strategic Services (OSS) which preceded the CIA. She was assigned to many stations including China and India and met her husband, Paul Child, a fellow OSS Officer, in Sri Lanka.  When they were married she resigned because that was what women did in the 1940s. After the war ended, Paul was assigned to the U.S. Information Agency in Paris. So in 1948, Julia was on her own in a world that was busy putting itself back together. Paul Child was a gourmand and knew Paris well. He introduced her to the best food she had ever eaten and she enrolled in Le Cordon Bleu. The rest is history.

She jokes that her first recipe was for shark repellant that she mixed in her bathtub. But it wasn’t a joke. She really did participate in a study of over 100 ingredients for their ability to deter sharks from trying to eat explosives set for enemy troops. The report of her work. 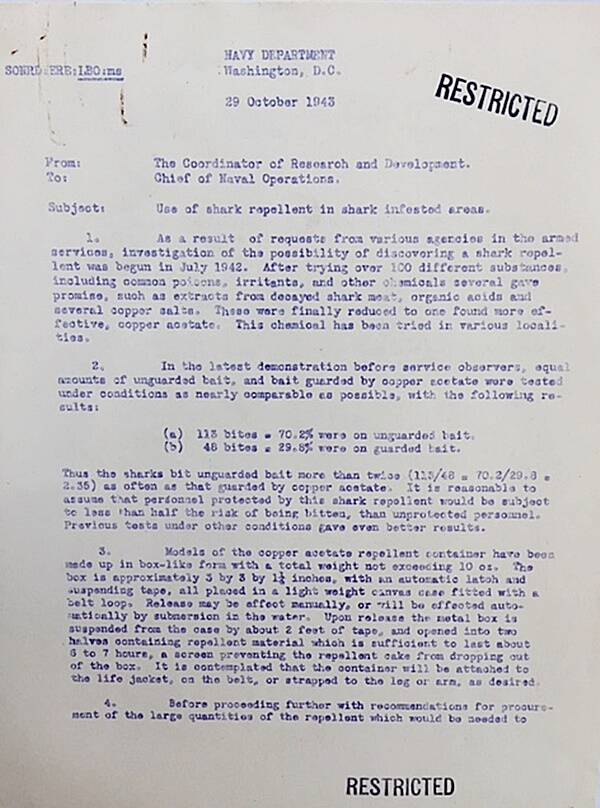 The first page of a report to the US Navy on the development and testing of a shark repellant in 1942-1943. The use was not just for soldiers, it was for explosives. The problem was that sharks were intercepting various weapons and rendering them useless, both the sharks and the weapons.

Where to  Find More 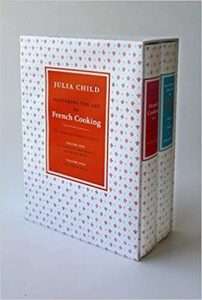 The most coveted and useful cookbook on French cooking in English was 10 years in the making and has remained a bestseller since its publication in 1961. Mastering the Art of French Cooking 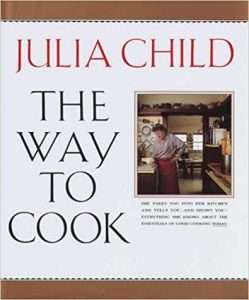 More about the way to cook. For Julia, there was a way to cook everything, “The Way.” The one that produced the best result. The Way to Cook.

YouTube now has many, many of her programs and interviews posted. One of the most talked-about remains The French Chef: Boeuf Bourguignon. Others exist only in memory since she was broadcast live in Boston on WGBH. Taping was then very expensive and wasn’t done until the station began sending the tapes by mail to other stations to air.

The first episode of the 2022 HBO Max Series, Julia, in which she actually cooks an omelet on a book review show is also posted (as of this moment).

And last but not least, a tidbit: Julia claimed to be 6’2″ tall but this is questioned in various of these stories by people who worked with her. She was “at least” 6’2″ we have to conclude. She ended up in the OSS because she was too tall for either the Women’s Army Core (WACS) or the Women’s Navy Core (WAVES).

Categories: Pass the Olives: Opinions, To Read and Sometimes Watch