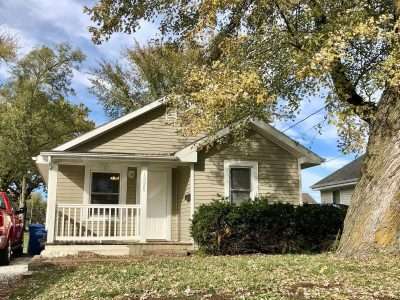 The renovated version of grandmother’s house in 2021, 100 years old. Same tree on the right. The angle, looking up a slight hill, gives the illusion of being larger than 600 SF.

My grandmother’s house was a white frame cottage, very neat and tidy, on the corner of two unpaved roads and with an outhouse in the backyard next to an apple tree. A rusted barrel was used to burn trash. The neighborhood smelled of burning coal all winter.

To the west were acres of cornfields; to the east a block of 12 identical houses, six on each side of the street. The perennially muddy roads led to a larger road with a city bus and eventually to the city.

When she and my grandfather bought the house, they were moving in from the family farm to be closer to jobs. They had six children. The house had two bedrooms, no bathrooms, and eventually one electric light bulb hanging from the ceiling in the center of each room. There was running water in one faucet in the kitchen. No central heating. Water was heated on the stove to take a bath in a tin tub brought in from the back porch. A wringer washing machine took up a quarter of the kitchen. The Victorian pie safe had wire screens over the decorative breathing holes to keep out mice from the cornfields.

It was 600 SF including an enclosed but unheated back porch.

With additional plumbing and upkeep done by her sons, my grandmother lived in her house through the depression in the 1930s until she needed skilled care in a nursing home in the 1980s. The light bulbs were still hanging in the bedrooms from the center of the ceiling.

A Family Home, Again and Again

My grandfather skipped off to California during the depression and my grandmother’s eldest son, who had just graduated from high school, helped her pay off the mortgage. In the 1940s my five uncles went off to war and my mother hitchhiked to Texas where the boys were. The last son was just out of the house when the older ones started returning, one by one. They brought their brides home to live until they could afford something else, sometimes not leaving until after their first child was born. When I was a teenager, my mother and her four children moved in and stayed for years.

Until the 1950s, there was no basement. No central heating. No bathroom or toilet. No garage. And no attic. The house still stands, renovated, and with a basement, central heating, and a bathroom. Most of the other identical houses remain as well. And the streets are paved.

Today, a 600 SF living space is considered the minimum for two people — and is normally only available in a rental apartment—where the rents rise regularly and the buildings are often not well-maintained. Most are not built to last even 30 years. My grandmother’s house is still lived in 100 years after it was built.

The average newly constructed house is 1200 SF or more, usually much more. And a two-bedroom house might also have 2.5 bathrooms. And a two-car garage. And a livable basement. Houses, even condominiums, are no longer affordable for a household with six children and one adult with a job washing dishes in a hospital.

Ownership is essential to stability and benefits almost everyone financially and socially. Rentals have a place in housing but they shouldn’t be the primary source of affordable housing.

Because my grandmother owned her home, she was able to remain in a stable neighborhood with people she had known for 50 years. Three and sometimes four generations either lived in those 12 houses or returned there for holidays or for support when they were financially desperate. My uncles and my mother all attended the same high school their children attended years later, with many of the same teachers. They all became responsible citizens with skills and stable jobs. They made it through the rough spots because their family home was always there.

The house was both my grandmother’s and her children’s lifetime security. It was home for more than 15 extended family members who moved in and out several times over four decades. The family grew and the house was the connection point. By the late 1950s, 35 inlaws and outlaws, three generations gathered for holiday meals. In 600 SF.

My grandmother’s house is my model for believing that it is possible to live in a small home and to live there more securely than in a rental—even a rental in a government-subsidized housing project. Ownership is necessary for this to happen, at least in the United States. It is particularly important to those making below 50% of the median income. The same people who have no access to contributing to our economy.

Many people have always lived minimally in small spaces—minimalism is only new to those who don’t need it because they are already receiving unrecognized government and social support.

The key factor for my family’s success was my grandmother owning a family home.

On the terrors of renting and the racket that keeps a large percentage of the homeless homeless read Evicted: Poverty and Profit in the American City by Matthew Desmond.