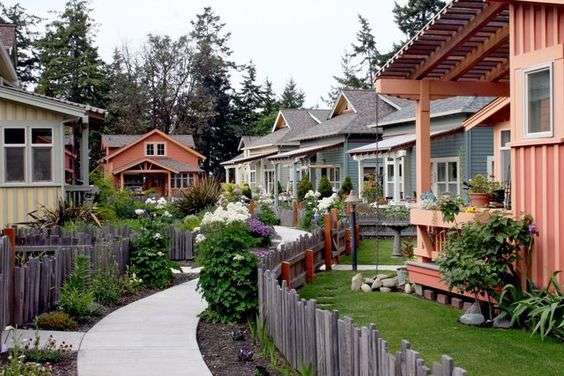 Just hearing the word cottages brings back memories of wandering along boardwalks through a maze of small Victorian cottages on Fire Island to go to the ocean. Or a New Jersey beach with little houses tucked away in the sand dunes, some photogenically falling down. Enclaves of brightly colored little fairy cottages all in a row near the beach. Or chaotic assemblages near lakes and streams where families have built compounds over the years slipping in another little one with each generation. The cottages becoming smaller and smaller as space and money run out.

I’ve been testing an idea with people this week, a totally random survey of reactions to a cohousing community composed of cottages. Their responses have been the same as mine — positive associations with little houses that are supposed to be small and huddled with tiny gardens inside tiny fences.

A cottage is a small house tucked away in a garden or sitting on blocks or piles above a sandy beach. Most probably old and cute. Definitely cozy. I’m not talking about the nineteenth-century grand camps built in the Adirondack Mountains in upper New York state so the owners and their guests from the City could go camping on the porch or boating on the lake. Cottages of even larger sizes were built along the coast or on private islands in New England. Both inspired by romantic notions of fresh air and hiking and swimming in ice water. Of course, they brought their maids. There is one available now in Newport, Rhode Island 6,000 SF with 15 bedrooms, 10.2 bathrooms, and 2.5 acres of land for $19 million. (The price is probably not negotiable. And the .2 bathroom is curious.) 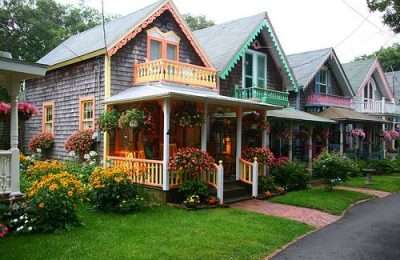 No one in my random sample had images of these isolated summer mansions as cottages. Their concept was like the picture above from Martha’s Vineyard, an island off the coast of Massachusetts, small cottages like those built hundreds of years before Tiny Houses. Many were made by hand without modern tools.

The concept of low-cost housing doesn’t have a romantic image and I think in order to move toward a physical manifestation, a low-cost community needs an attractive image. Certainly, if it is to sound interesting to zoning boards and neighbors it has to presented with a vision that evokes good memories. One of the difficulties is that neighbors threatened by their own fears are convinced that cohousers are really hippies. They will be loud and unsightly and smelling of suspicious smoke.

This view needs a strong image of something else that will intrigue them instead of inflaming them. I’ll write more about cottages in the next few posts to see if we can build a positive image for them and us.