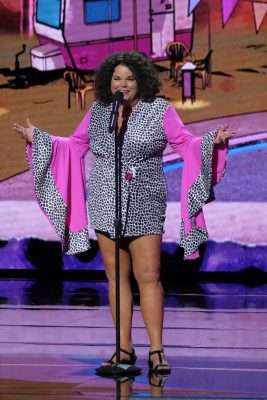 Comedian Vicki Barbolak as a finalist on America’s Got Talent in 2019. Barbolak is also an ordained minister and founder of Wedding Chapel to Go. She is also available as a speaker at conferences and corporate events.

Just when you thought this was going to be another boring day in the hunt for cohousing, you are going to discover a hilarious comedian, Vicki Barbolak, who made the finals of America’s Got Talent (AGT) in 2018, and lives in a trailer park, also known as a mobile home community in Oceanside, California.

She did a tour of her community on AGT complete with singing neighbors and flash mobs, a parade and convertibles. Unfortunately, I haven’t been able to find it online. There are some sneak peeks of the park in the introductions to her other performances posted on YouTube.

Has anyone considered a trailer park?

Mobile homes, since 1976 called manufactured homes, have greatly increased in quality as they have been regulated by several comprehensive legislative acts. They now must meet federal safety standards and are considered as safe as other construction. Some have green ratings for energy efficiency, sustainable materials, etc.

Mobile home parks most often have a strong sense of community and are no longer temporary, if they ever were. Their mobility since the 1950s has been questionable and now there is no pretense of it. The homes are manufactured in factories and delivered completed, ready for installation on a foundation. Discussions about living in trailer parks commonly include stories about long-term relationships and community. In addition to affordability, the advantages residents cite include personal safety and shared resources. It is not unusual for parks to function very much like cohousing communities, even the rental parks, and some are owner managed and maintained.

A new mobile home starts at ~$40,000 for 902 SF, 3 bedrooms, 2 baths. One figure I found for delivery and installation was ~$6,000. Lots are often rented rather than purchased but coop parks are increasing in popularity. This means a higher upfront fee for buying shares in the HOA but a much lower rate for monthly fees because no one is extracting profits from the community.

My totally rough calculation as totally not a lawyer or CPA indicate that the option seems affordable for households with annual incomes of ~$15,000. With a $40,000 15 year mortgage, the monthly principle and interest payments would be ~$300. There would be additional costs for utilities, leasing the land, etc.

While certainly not exact, I think citing figures is important for moving our brains out of the $2,000-$3,000 a month range requiring a $60,000 downpayment plus closing fees. Most residents of mobile home parks earn less than $50,000.

Each household can choose many options because new manufactured homes are ordered & custom built before delivery. When prices and other amenities can be determined up front planning is much easier. There are no surprise construction costs. Zoning for a park is certainly an issue in most areas, but it is also an issue for multi-unit projects. The standard is still the one-family home on a lot. Manufactured home parks are typically located on the outskirts of a city.

The facts from an excellent article in Curbed from 2017, “Mobile homeland; Whatever you call it—mobile home, trailer park, manufactured housing—the retro living module is undergoing a renaissance” by Sarah Baird, Associate Professor of Global Health and Economics at George Washington University. lots of information, explanations, resources. She specializes in affordable housing. The facts she cites:

There are people who specialize in creating trailer parks. Interestingly the largest manufacturer (owned by Berkshire Hathaway—Warren Buffett) will oversee the whole process including land acquisition, infrastructure (sewer, water, electricity), financing, and insurance. A one stop shop. The homes start at $40,000 and can go very high. Claytonhomes.com 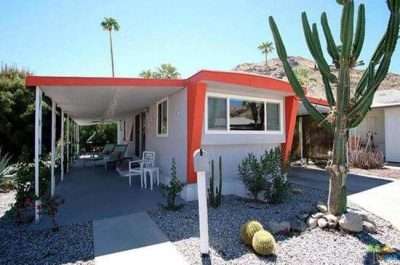 A typical mobile home in the southwest with a bright orange trim and a shaded terrace.

Mobile Home Living is a blog started by a woman who found herself living in a mobile home with no idea how to take care of it. Many ads interspersed with lots of advice and information. Many interior and exterior photos of redecorated trailers. There is also a Facebook page for Mobile Home Living.

Affordable cohousing is doable using manufactured homes. Don’t despair. Just like building other cohousing comm, you just take it one step at a time: research options, analyze the data, make a plan, gather your people, and figure out what to do next. Most of these steps can be done at the same time but don’t try to go in more directions than you have the person power to do. Usually a small core group can handle these beginning steps.