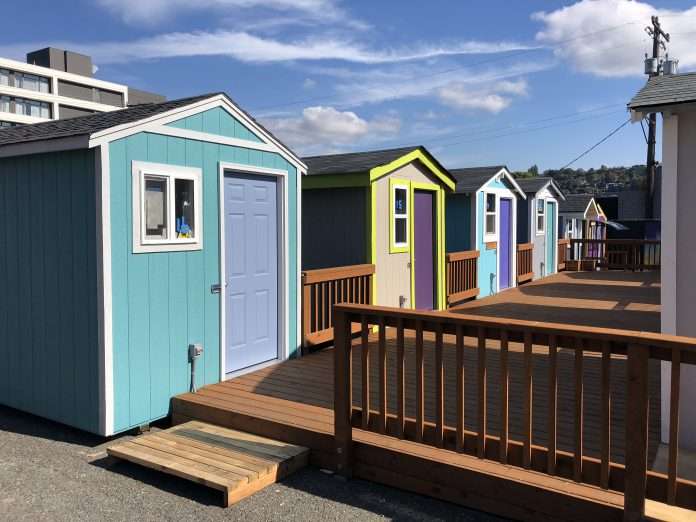 This entry is based on an article by Sharon Lee, Director of the Low Income Housing Institute (LIHI), which owns and manages more than 2,200 units of affordable housing in and around Seattle WA. In “Tiny House Villages in Seattle: An Efficient Response to Our Homelessness Crisis” Sharon presented the “lessons learned” in the tiny house villages program in the first three years. The article was published in ShelterForce: the Voice of Community Development on March 15, 2019.

In January of 2019, in one county there were 12,112 homeless men, women, and children in Washington State. Over half had no shelter. The first three villages of tiny houses were planned, constructed, and opened in 2018. They house a total of 155 homeless people.

There are 15 to 34 tiny houses in each village. There are also shared community kitchens, a community meeting space, counseling offices, storage, donation huts, security huts, and plumbed bathrooms, showers, and laundry facilities. Each village required only four to six months’ lead time to be constructed.

A village requires anywhere from 6,000 to 30,000 square feet of vacant land, depending on the number of tiny houses and common facilities to be placed there. There are suitable urban infill sites zoned for residential and mixed-use, as well as larger commercial and industrial sites. It takes careful research and help from local government to identify good sites, and we were quite surprised to find a large inventory of publicly owned underutilized and surplus sites held by the city, county, state and even the Port of Seattle. We also found multiple nonprofit, private, and church-owned properties that could be used.

Effective collaboration between LIHI and city departments was crucial. The LIHI coordinated with city departments to install water, sewer, and electrical connections. City architects planned each village. LIHI staff raised funds and organized the help of hundreds of donors and volunteers who applied for permits, led work parties, and developed management and staffing plans. Neighbors, businesses, and the public were informed and consulted throughout the process.

Tiny House Villages vs. Other Options

A new emergency shelter requires years of site planning, permitting, and construction, and millions of dollars in construction costs. Creating a tiny house village of  15-34 homes can be done in less than six months and costs between $100,000 and $500,000 depending on size and whether the connections for water, sewer, and electricity are close by. Each village can serve 20 to 70 people for $60,000 to $500,000 a year, depending on staffing and services. Villages are staffed 24/7 and have Village Organizers and case managers to help residents prepare for long-term housing, jobs, and services.

Spaces in tiny home villages represent approximately 12.5% of all shelter beds and safe places the City supports and make up less than 3% of all homelessness response investments made by the City of Seattle.  —Seattle Human Services Department

Other options to shelter homeless people are more expensive and take more time to establish. It has taken six years to find a site for a men’s shelter because of community opposition. Financing, permitting and construction will take two years. The shelter might open in eight years. A plan to renovate an unused city-owned building for 100 people is expected to cost $2 million, plus $4 million to fund the next two years of operations. The cost per person is more than twice that of a tiny house village.

Compared with other options, tiny house villages are quicker, more humane, and cost-effective.

In forced removals, homeless people will move to another neighborhood or move away and then return rather than enter a shelter. But many will move into a tiny house which is much more comfortable and healthier than a wet sleeping bag or tent.

Each tiny house is insulated and heated, and the size of a small bedroom, 8 by 12 feet. A small family can live in one tiny house; a large family in two tiny houses side by side. Each furnished house has a locking door, windows, an electric light, an electrical outlet, and a smoke detector.

Tiny house villages keep families together and along with their belongings safely indoors. They eliminate the need for frequent moves between shelters. With access to showers, laundry, and a kitchen the residents find work, maintain a job, attend school, improve their health, and access community and health services.

The average length of stay is four to five months, but there is no time limit. An important factor has been engagement with case managers to get proper IDs, obtain Social Security cards, complete housing applications, and establish a steadier income.

The Importance of Tiny Houses to Successful Outcomes

LIHI’s goal was to provide tiny houses as a stabilizing step to permanent housing. The rate of successful housing placements in 2017 was 39 percent. In 2018, 42 percent. From city-funded shelters usually open only at night, the rate was only 4 percent, and from 24-hour shelters with more services, 20 percent.

The City-permitted encampments have met and exceeded the contracted performance measure. The model is successfully serving people who have been living outside in greenbelts, on the streets, in cars, and in hazardous situations.  —Human Services Department

There are now 10 tiny house villages located throughout Seattle on government, private, nonprofit, and church-owned properties.

The tiny houses have been accepted well by the residents who are moving off the street or out of city shelters. Even minimally equipped and finished, without bathrooms or kitchens, the homes are safe and secure and warm.

Many of the benefits of the villages are attributed to the dedication of the caseworkers. But caseworkers are also available to the homeless who are not living in tiny house villages. The villages, even if transitional, provide a stable environment and predictability. The doors lock. No one has to cope with traveling to city agencies to find the caseworkers—taking their children and belongings with them. Available energy can be used to better their lives.

The value is stability and a place to belong. Neighbors who can help each other. And a village layout that encourages socializing, not isolation.

Sharon Lee
Sharon Lee is the executive director of the Low Income Housing Institute, which owns and manages over 2,200 units of affordable housing.