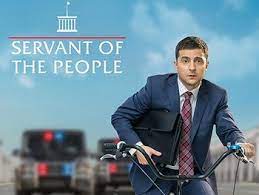 Netflix has removed this TV series, Servant of the People, directed by and starring Volodymyr Zelensky — yes, that one. And who was formerly known in English-speaking countries as “Vladimir.”

I had seen this TV series before Volodymyr Zelensky became the president of Ukraine. When the election was announced, I noted that it was the same name, a coincidence naturally, probably a common name. Then I saw him sitting in the White House talking to Donald Trump. “That looks like the same guy. And he doesn’t act like a president. He is just sitting there sort of wiggling around, legs akimbo. Doesn’t make sense.” But I was also busy doing something else and I forgot about it.

Then I saw an article that mentioned the comedian who had been elected Ukrainian president and looked him up. Volodymyr Zelensky has long been an activist, filmmaker, and comedian. In this satirical series, he plays a high school teacher who goes into a tirade in class, saying what he thinks of the Ukrainian government. His students film the whole thing on an iPhone, post it on the Internet, and it goes viral. They organize an election campaign which he is too angry to even notice. Of course, he is elected by a landslide. The heart of the series is what happens next. The process of being primed for office—designer suits, prestige watches, personal masseuse, no waiting in lines, all his bills are paid — the normal things that corrupt politicians look forward to.

To call it a comedy series doesn’t do it justice—political satire is more accurate. It is funny but it is also insightful and honest. It allows the people to see the absurdity of the totally corrupt Ukrainian president, and in real life, they elected Zelensky in his place.

Now that Volodymyr Zelensky really is president it must have been embarrassing or at least confusing and Netflix removed it. As of this moment, the Internet Movie Database has an episode list and three trailers posted.  This is the best place to check see if the series is available elsewhere. And Wikipedia has a nice entry as well. The series does not appear to be available on DVD.