Among the households earning less than $15,000 a year in 2018, nearly three-quarters were spending more than half of their incomes on rent. Even a household with above-average income is considered overextended if its housing costs are above 30% of income. But everywhere, not just in big cities, increasing numbers of rentals require spending at least 60% of income. Harvard’s Joint Center for Housing Studies publication on rental housing in 2020 reports:

Despite slowing demand and the continued strength of new construction, rental markets in the US remain extremely tight. Vacancy rates are at decades-long lows, pushing up rents far faster than incomes. Both the number and share of cost-burdened renters are again on the rise, especially among middle-income households. These conditions reflect fundamental market changes since the recession, including an influx of higher-income households, constraints on new supply, and substantial losses of low-cost rentals…

What about already built low-income housing?

The Joint Center for Housing Studies found that between 2000 and 2017, more than 2 million low-cost rental units were lost from the market. The American Community Survey reported another 410,000 lost in 2018.

This is not sustainable for anyone.

Cohousing is often criticized for being a middle-class movement that joins the trend toward higher than average-cost living units. Most cohousing communities whether condos, apartments, or houses are also new construction. But this isn’t just a cohousing problem.

The push for growth that big builders and real estate investors feed means available housing becomes larger and more costly. Everyone producing housing earns more money as rents and prices rise. But with our systemic income inequality, only the salaries at the top of the scale accelerate as quickly. And everyone’s expectations rise as they aspire to the higher standards. Banks begin to see any lesser standards as risky and not worthy of investment. As one banker told a forming cohousing community in Florida, one-bedroom condo units are not eligible for construction loans or mortgages because they had no resale value. And that was in 1996. The banker was not interested in seeing the applications for a one-bedroom—their most requested size.

How many people need how much space? 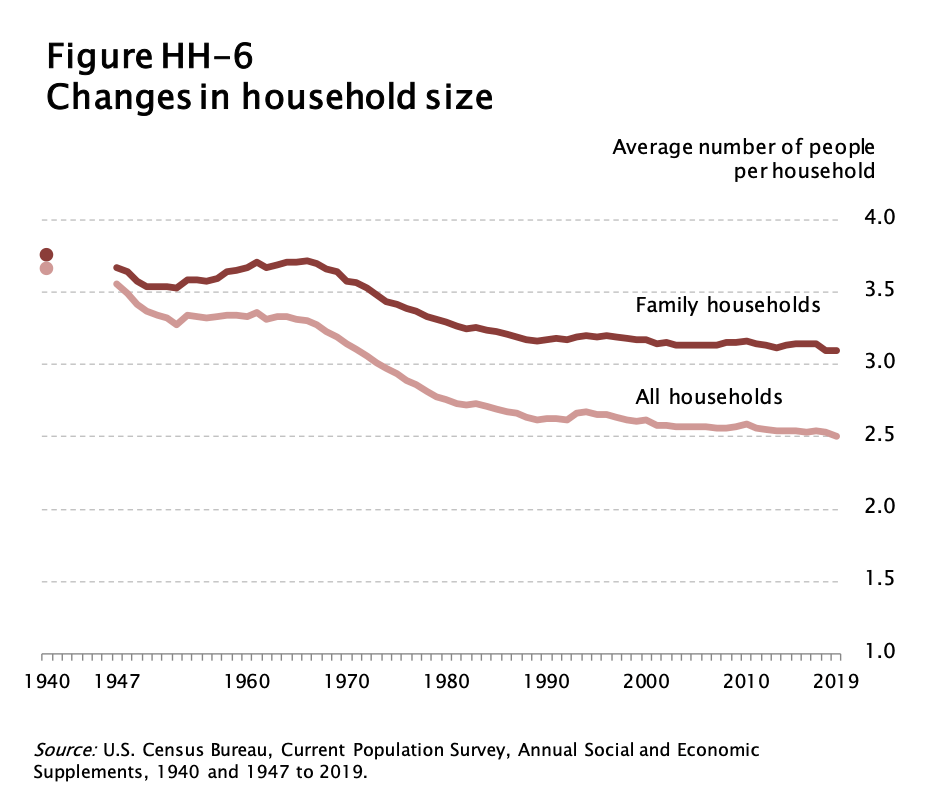 Even if housing qualifying for federal assistance was available for those who need it, these projects are rarely planned as quality construction and become degraded in less than a generation. Successes in housing projects have been few and those built in the 1960s and 70s were widely considered to have been a failure. By now many have been destroyed and replacement housing is more expensive.

A HUD program referred to as “Section 8” is the Housing Choice Voucher program. It provides more flexibility and allows households to rent in any building that will accept the vouchers. And it has very long waiting lists. Preference is given to the homeless, those paying more than 50% of their income for rent, and those who have been involuntarily displaced. The voucher amounts vary based on the income of the household but may cover only 60% of costs. The gap between 20% of the median income, the very low-income threshold, and 80% of the median income, most often used as the affordable threshold is large. And a lot of households land there.

And only one of four very low-income households eligible for federal housing assistance in 2019 actually received it.

Is there any way out?

Sustainable housing should provide safety and comfort, and independent social and financial stability. People should feel an adequate sense of security and control. One way to achieve this is to understand how to live in smaller spaces. And create a plan for getting smaller spaces built because if it doesn’t exist, no one can live in it. (For more on this subject see Construction > Tiny Houses.)

Even more relevant, most of it is there to contain our stuff—things we don’t necessarily use but have accumulated. Stuff we have to take care of. In Life at Home in the Twenty-First Century by researchers at UCLA, 75% of two-car garages were filled with stuff, not cars. Of all the events at home, the time spent dealing with stuff—picking up, putting away, cleaning, fixing, etc.—was accompanied by the highest spike in stress hormones. The Natural Resources Defense Council, confirmed by other studies, reports that 40 percent of the food Americans buy finds its way into the trash.

What does it mean to understand living in smaller spaces?

Firstly, understand that most other people in the world live happily and well in much smaller spaces. In a 2009 study posted at Shrink That Footprint, homes in China were less than 225 SF per person and in the US, 825 SF per person. The next highest is 779 SF in Canada. Sweden has a high standard of living and is famous for its happiness. Its residents live in an average of 425 SF per person, almost half the size in the US. In Russia, living spaces have an average of 237 SF per person.

The Tiny House Movement considers a tiny house to be 100-400 SF. Tiny houses are usually custom-fitted for tiny living with many features that maximize the use of space. Graham Hill wrote in “Living with Less. A Lot Less” his story of downsizing from a 3,600 SF house to a 420 SF studio apartment.

I sleep in a bed that folds down from the wall. I have six dress shirts. I have 10 shallow bowls that I use for salads and main dishes. When people come over for dinner, I pull out my extendable dining room table. I don’t have a single CD or DVD and I have 10 percent of the books I once did… My apartment sleeps four people comfortably; I frequently have dinner parties for 12. My space is well-built, affordable and as functional as living spaces twice the size.

How do you get from big to tiny?

After a windfall from selling his software company, Graham had begun buying things at phenomenal prices to fill every square foot of his new turn-of-the-century house. He even hired a personal shopper, Sven, to help him find things.

I started to wonder why my theoretically upgraded life didn’t feel any better and why I felt more anxious than before.

My life was unnecessarily complicated. There were lawns to mow, gutters to clear, floors to vacuum, roommates to manage (it seemed nuts to have such a big, empty house), a car to insure, wash, refuel, repair and register and tech to set up and keep working. To top it all off, I had to keep Seven busy. And really, a personal shopper? Who had I become? My house and my things were my new employers for a job I had never applied for.

It took 15 years and an escape to Barcelona, unemployed, to begin the process of understanding living with less. He now designs houses that “contain less stuff and make it easier for owners to live within their means and to limit their environmental footprint.”

Renting is not always a viable or desirable option

This is a long way around to say “Why not just rent?” is actually not a real possibility for many people. Rent what? For how much? And for many learning to live with only the stuff they need in a space that is small enough to live within their means brings more happiness. And for many others, it is an opportunity to reduce their means—to work at what they love rather than work for a salary because it buys more stuff.